The project aims to test and implement an innovative form of public-private partnership between insurance, municipalities and companies to increase the resilience to climate change of Italian Smes, making available to them a simple and free tool (CRAM tool) for the assessment, prevention and management of risks related to catastrophic events.

Derris, a project co-funded by the European Life tender, involves the leadership of the Unipol Group alongside partners including the City of Turin, Cineas, ANCI, Coordinamento Agende 21 and UnipolSai.

Derris is the first European project that unites public administration, companies and the insurance industry to reduce the risks caused by extraordinary climatic events. 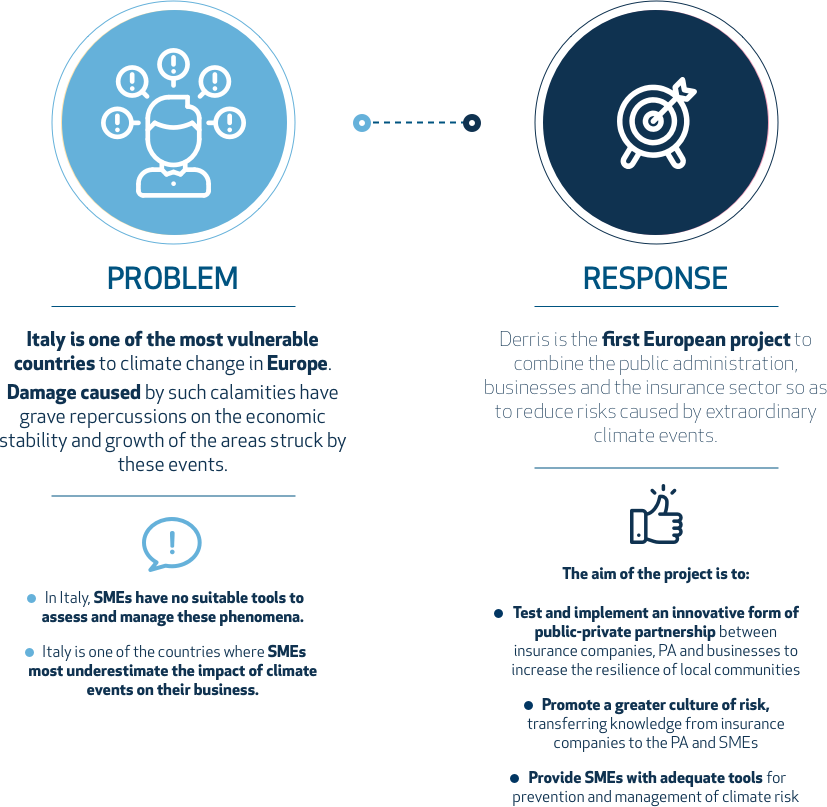 The DERRIS project was piloted in the city of Turin: 30 SMEs that participated in the initiative, located in the 6 identified areas, were selected. Between October 2016 and March 2017, the companies taking part in the trial received free technical support from the project experts, and more specifically:

The aim was to provide companies with guidance in the drafting of an action plan for adapting to climate change.

During the pilot trial in Turin the project developed a simple and intuitive tool (CRAM tool) which gives SMEs the ability to understand, through georeferencing, which of the 7 DERRIS project risks (flooding, precipitation, wind, lightning, hail, temperature and landslides) they are exposed to and which solutions they could apply in their companies to prevent damage.

To enable as many Italian SMEs as possible to identify the main weather/climate risks to which they are exposed and define the possible actions for managing emergencies and reducing their exposure to risk, from 2017 the trial was extended to 10 other local authorities: Alghero, Almese, Avigliana, Bassiano, Bologna, Genoa, Milano, Molfetta, Padua, Pescara, Rovereto, Udine, Varese and L’Unione dei Comuni del Circondario Empolese Valdelsa. In the local authorities involved, the companies had the chance to take advantage of hours of training and technical support (through the performance of in-company inspections) in order to draft their action plans for adapting to climate change using the CRAM tool.

Look the Video tutorial for the self-evaluation of climate risk developed as part of the European DERRIS project and the project video.